A message trace shows the complete trace of a message from its being produced and sent by a producer to the Message Queue for Apache RocketMQ broker to its being consumed by a consumer, and consists of the time, status, and other information on each node. The trace provides robust data support for troubleshooting in production environments. This topic describes the scenarios, query procedures, and parameter description of query results for message tracing.

In Message Queue for Apache RocketMQ, a complete trace of a message involves the producer, broker, and consumer. Each role adds relevant information to the trace when it processes the message. The information is aggregated to reflect the current status of a message.

You can use the message tracing tool for troubleshooting when messages are not sent and received as expected in the production environment. You can query the trace of a message by message ID, message key, or topic to check the sending and receiving status of the message. 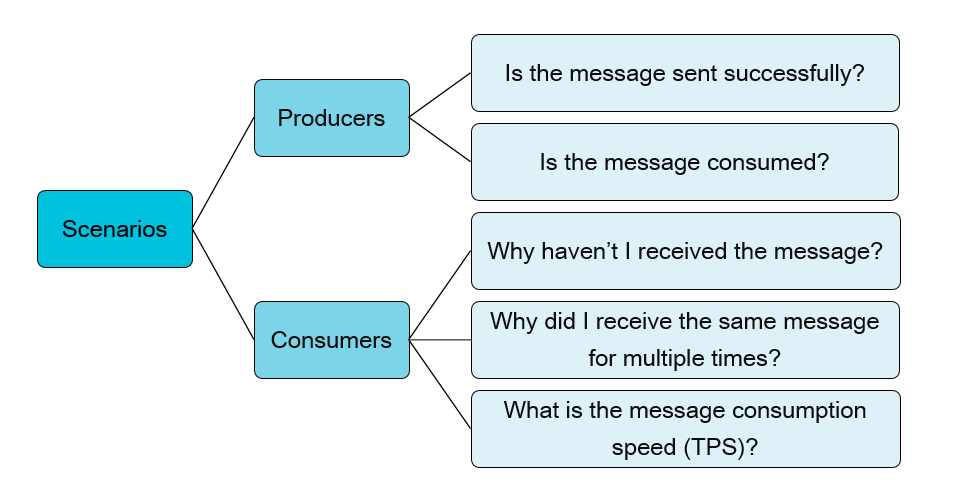 Assume that you are looking for the reason why you have not received a message as expected based on the log information. Complete the following steps to troubleshoot the issue with message tracing:

No additional access costs will be created when you use the message tracing feature. After any message is sent normally, you can query the sending trace of the message by the message property in the Message Queue for Apache RocketMQ console. Note the following for the message trace.

Messages are stored in Message Queue for Apache RocketMQ for three days by default, and we recommend that you do not modify the value. That is, only the messages that are generated within three days before the current query time can be queried. For example, if the current time is 15:09:48 on June 10, 2019, traces of the messages that were generated as early as 15:09:48 on June 7, 2019 can be queried.

The following table describes the terms related to message tracing:

icon of a task, Sending Status and Consumption Statusof the message appear. In addition, the message sending status and consumption status appear in the Producer and Consumer sections in the message trace. The statuses that may be displayed are as follows: